Since the beginning of this year, more precisely starting from Jan, 3 I got a strong and consistent increment in the number of downloads and consequently in the number of active installs on all my applications. Since I did not do any promotion I can only conclude that this has to do with Christmas. 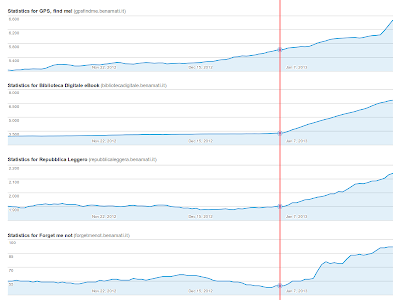 If it was not a Christmas effect it would not be possible to explain why almost all my applications got this big increase starting from the same day. This one week delay may be caused by how Google counts the downloads.

Now it is time to invest more in promotion and I already put $50 on AdMob for GPS, find me! focused on the Brazilian market with amazing results. I'll describe this new campaign in the next post.
Posted by Unknown at 7:20 PM No comments:

Finally Christmas time is over.

I'm a bit disappointed about the number of downloads during this period. I was expecting a visible increment but the graphics give me some figures that I do not know how to interpret.

The first graphic refers to GPS, find me! while the second refers to Digital ebook Library; both are relative to active installs. The red line is positioned on Dec 25.

As you can see I certainly had an increment in the active installs after Christmas, but his increment is either too small to have a statistical relevance or too far from Christmas to be sure that there is a connection.

Look how fast the active installs for Digital ebook Library increase after Jan 3; it is more than 900 in just one week and I did not do any promotion. Something must have been happened, but what? Let's see in the next weeks what it happens.

Now a couple of words about Tapjoy. Finally the credits schema for GPS, find me! and Digital ebook Library started to work. It is too early to talk about numbers, but I think this month I'll earn more from Tapjoy than AdMob. By the end of January I'll post the monthly income.
Posted by Unknown at 12:04 AM No comments:

The year is finished and is time to make a short balance. Follows the monthly incoming report of my apps.

Jokes apart: for 2013 I'm expecting an average monthly income higher because only at the end of the last year the schema of the credits for GPS, find me! started to work.
Posted by Unknown at 11:55 AM No comments:


Today is Christmas and I decided to not invest money on a new AdMob campaign as I prefer to see what happens in this particular period of the year. The data I collect now could be useful for the next year.

I was tempted to not change anything in my application to see how the Christmas time affect the number of downloads, but in the last days I discovered something very interesting that made me change mind (and feel a bit stupid).

Normally when I look at the statistics of my app I only check the "Active device installs" that summarizes the situation of the installs; the higher the figure the happier I was. In the last two months the active device installs were not growing as I expected and I put the blame on the lack of visibility of the applications in the market.

Although the visibility is a real problem, there is another aspect that should be taken into consideration to explain a slow active installs increment: the tendency of the user to keep the application installed.

Looking at the daily installs and daily uninstalls I discovered that:

so many daily installs means that the visibility is not the main issue and I have to work in the direction that makes the user to keep the app installed. Since almost all of the user reviews are enthusiastic I think that the app itself does not have any problem and that the big villain is the user interface, which I admit is rather poor.

I spent one week to introduce themes in the application and I created three themes. You can see the screenshoots here below: 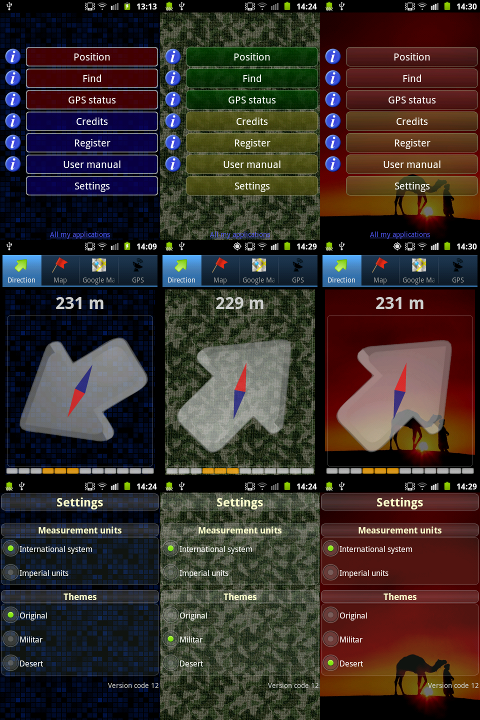 If i'm right I should see a decrement of the daily uninstalls. I'll update you in a couple of weeks when the Christmas madness is over.
Posted by Unknown at 4:43 PM No comments:

Tell to a friend mechanism

The AdMob campaign for GPS, find me! has been terminated since two weeks and the 68 new users I gained are still there; this means that my application is considered enough valuable to deserve a few MB of space in the device. This makes me very happy, but the tell to a friend mechanism that I ingenuously was expecting did not happen as I did not see any significant increment in the downloads after the campaign.

I think that 68 new users do not reach the critical mass that can feed and sustain this mechanism and for this I'm planning to invest more money to investigate this aspect. The only doubt I have is about the timing.

As Christmas is near I do not know if it is better to wait and look what happens with the hundreds of thousands of the new devices activated in this period or to join the Christmas effect with a new campaign to give a great burst of downloads...

I'll keep you informed, stay tuned...
Posted by Unknown at 9:03 PM No comments:

After a few days running the $0.02 AdMob campaign for GPS, find me! I terminate my budget.

My first impression is good and I am very satisfied because for only $45.06 I got 259,194 impressions and 4,172 clicks, which is much more than what I could get by sending messages to forums or paying for a review.

I am not so naive as to think that all clicks were done on purpose as there is certainly a large percentage of unwanted clicks and clicks made ​​for the sole purpose of supporting the application that shows the add.

But the effect on the download is visible as you can see from the graph below:

A marks the day when I begun the $0.01 campaign and B the day when I started the $0.02 campaign. The little increase of downloads in the period AB could be a simply statistic fluctuation, but after B there is a real increment. In just five days I got 68 installs!

Now that the campaign is over I want to see if these 68 new installs would generate more downloads via the mechanism of the "tell to a friend".

Next week an update.
Posted by Unknown at 8:53 PM 2 comments:

Yesterday I setup a new AdMob campaign for GPS, find me! with the bid set to $0.02 and the result confirmed my theory: if you set the bid to its default minimal value you will not get many impressions because you have to compete with too many developers.

Rising my bid just by one cent (someone would say that I doubled it) I got much more impressions and clicks than before.

Here are some figures to understand better the difference on a 24 hours statistic:


since my campaign was approved just 15 hours ago the values you see are extrapolated from the actual trend.

As you can see the difference is very big!

What about the conversion rate? Well, with the $0.01 bid it was hard to tell, but with this new campaign it is immediately recognizable a peak in the downloads. In less than 20 hours I triplicated the daily install average from USA passing from 10 to 30.

It is early to make a reliable statistics, I'll come in the next days with more data.
Posted by Unknown at 10:46 AM No comments: 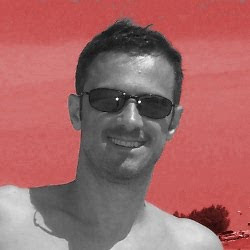